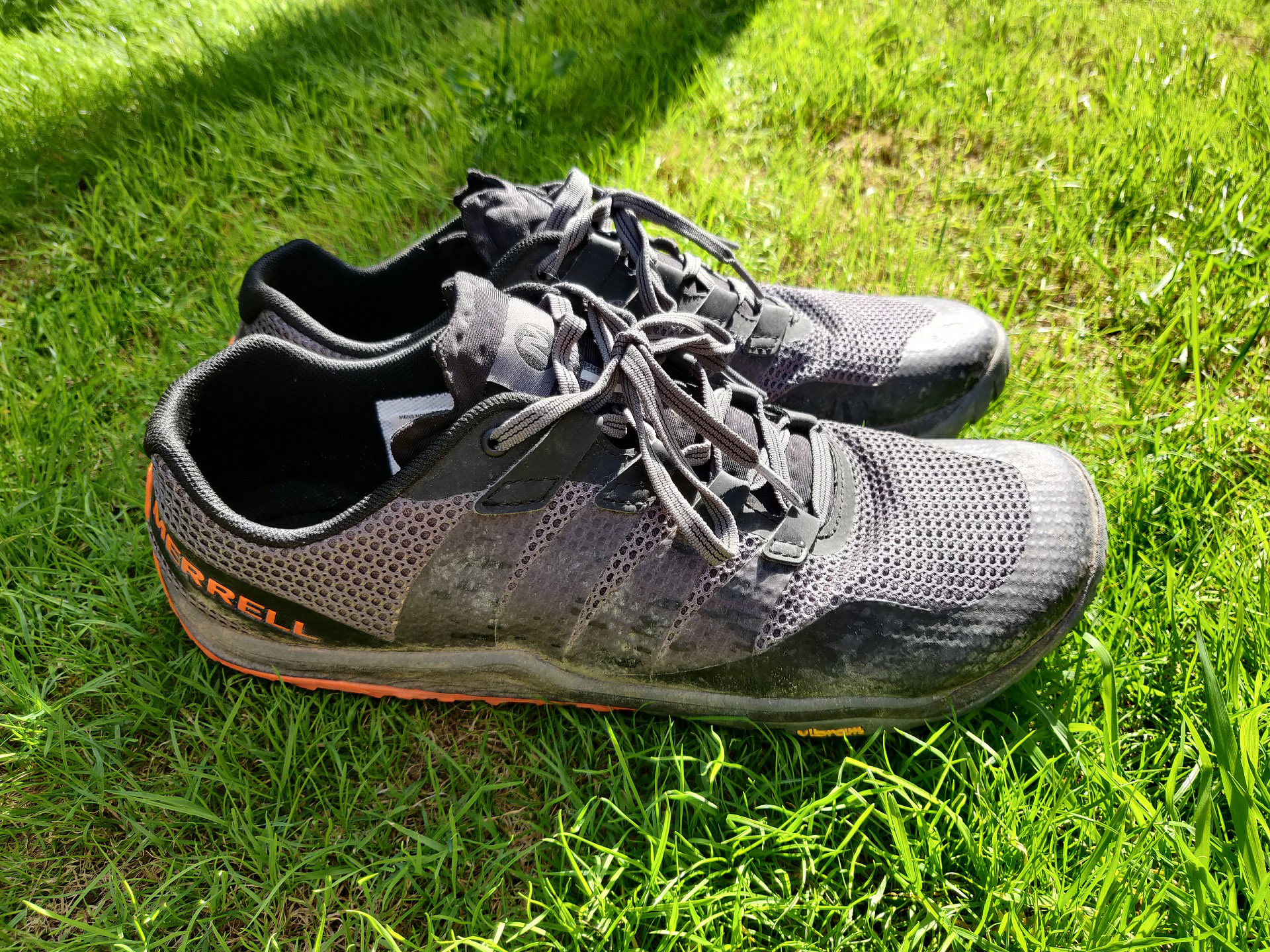 Lately, I’ve been interested in some of the proclaimed benefits of running barefoot or minimalist. The so-called benefits include reduced strain on joints and knees as more of the stress is picked up in muscles and tendons.

Leg and foot muscles should build up very nicely in a minimalist pair of shoes. As long as your body can take the initial strain, over time you’ll become a stronger runner.

With that in mind, I picked up a pair of Merrell Trail Glove 5 Fitness shoes. A nice, flexible, lightweight trail running shoe.

On arrival, I tested out the flexibility by rolling them up into a tight roll. They flex quite easily and are indeed very lightweight.

There is a small amount of padding which definitely helps on trails with small stones and rocks, but not too much. You feel much more in tune with the terrain when running in these.

The toe box is nice and wide and you get plenty of room for your toes to spread out. The vibram soles are nice and grippy. You shouldn’t have any trouble on slippery gravel sections and other areas out on the trails where grip matters.

As someone who has never run on the fore foot, these instantly changed my style. You really feel the ground below you with minimal padding, especially if you’re a heel or midfoot striker such as myself.

I found I had to change to a slightly front biased foot strike in order for my leg muscles and tendons to absorb impacts on each stride. If I didn’t do that, the impacts were far too jarring on my heels.

At first I felt absolutely great. I discovered many muscles in my feet that had not really been exercised much at all before. (From what I’ve gathered, there many different muscles in the foot and if you run in padded shoes you only ever really work a few of those).

My calf muscles burned, but I felt like I was so much lighter. (With the much lighter Merrell Trail Glove 5 compared to my usual Salomon Speed Cross 5 shoes). My pace was in my faster pace bracket too.

For new shoes my usual strategy is to limit the first run to 5km in order for them to wear in over a few runs. The first run in these was a 4km route up and down a slightly hilly trail near to home.

The next day my feet were swollen and the muscles were extremely stiff. Ankles and calf muscles were in a similar state. I clearly overdid it with just 4km. Even though I felt great during the run, I was putting way too my strain on my body by running in a completely different style (landing on the front of my foot).

After some recovery time, I re-introduced the Merrell Trail Glove 5 fitness shoes slowly to the occasional run. I would still like to slowly move my midfoot to heel strike forward to the fronts of my feet, but it’ll take time and conditioning.

For anyone used to a normal padded running shoe, who would like to go minimalist with a lightweight trail running shoe, I would still recommend a shoe like this. Just go easy on yourself. Stick to 1 or 2km at first for at least the first 5 runs. Slowly introduce them into your runs and see how you get on.

The lightness and connection with the ground feels amazing. I’ve put in around 50km on them so far, and things are getting better. As long as I tame my runs significantly, I don’t get sore feet or stiff muscles after runs.

I won’t be going barefoot anytime soon, but my runs in these minimalist style trail running shoes are getting longer as I practice. It’s a refreshing change to the usual trail running shoe and for now that is keeping me keen to progress further.

In closing, I found a great video on Youtube that includes some good advice on your first minimalist, lightweight trail running shoe run.