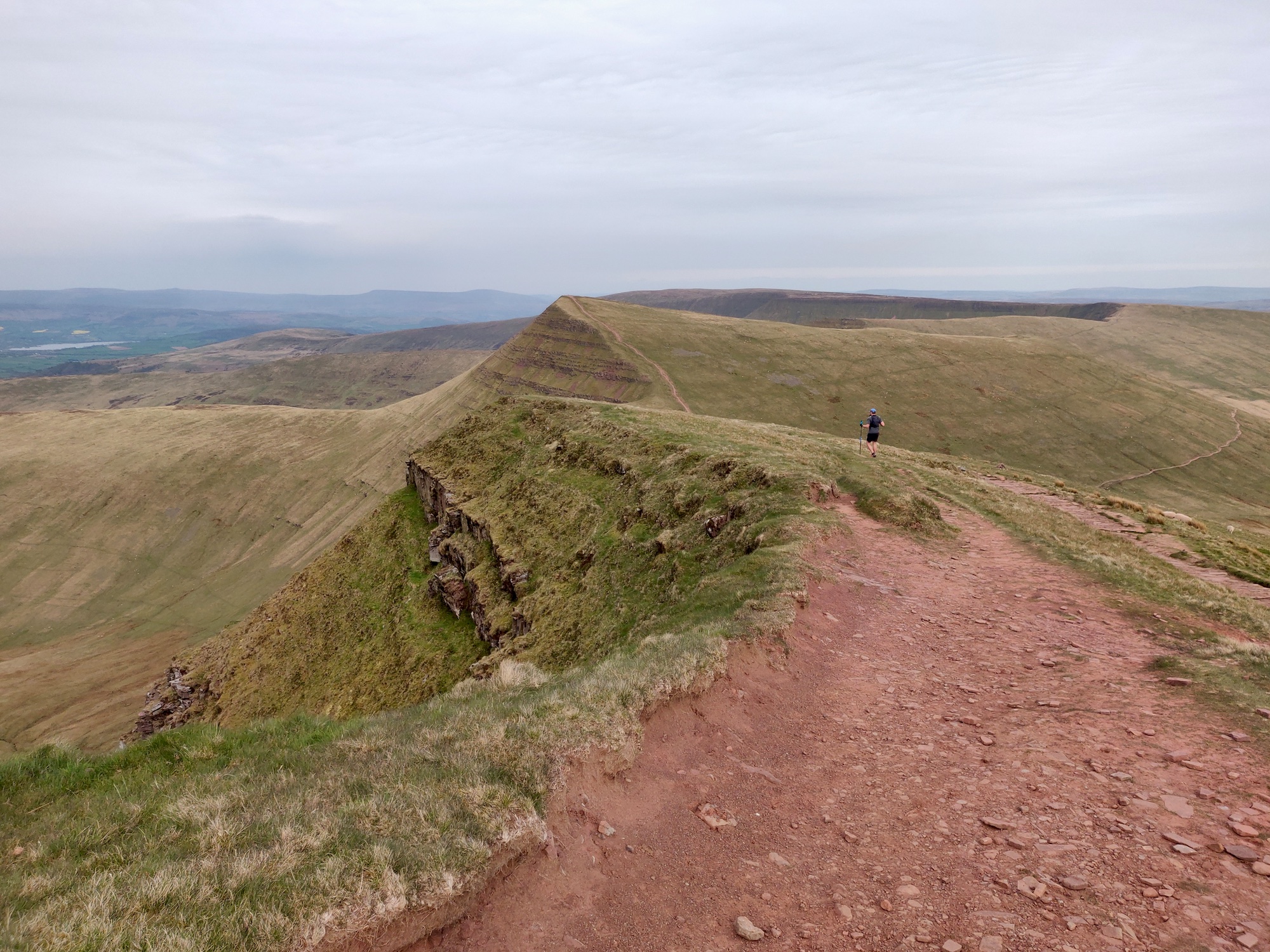 Last Saturday I ran the 2022 Blacks to the Beacons 50 mile ultra marathon. The race was 52 miles over the Black Mountains and Brecon Beacons in Wales, with an elevation of about 11,000 ft (3300 meters).

I finished with a chip time of 14:30:56, placing 29th (21st in my age category). It was a tough race with the combined distance and elevation!

Here are some of my highlights (aside from finishing the Blacks to the Beacons 50 of course):

Here are some highlight photos.

My wife and I hired a camper van for the weekend, camping at a nearby designated field. We got my race registration done on Friday evening. Limitless Trails were efficient and very well organised.

They checked my race pack for the mandatory requirements and gave me my GPS tracker and bib.

Returning to the camp site for the evening I spent some time re-packing and organising my race vest.

For the running kit itself, I started with:

I setup a drop bag for CP4 (Parkwood). I had various spares and extra bits of food and drink packed. The main spares I wanted were:

In the morning I ate a quick bowl of cereal and snuck in a small coffee. I grabbed a slice of peanut butter toast and a banana and ran a short distance from the camp site down to the local village hall. Buses were there to transport all runners to the start line closer to the Black Mountains.

The morning was cold, but already starting to warm up. We had a perfect day in terms of weather.

The initial miles were slower going as there were some steep climbs and of course everyone was more bunched up. Running poles were deployed as we all began the ascent up to the Black Mountains.

After climbing the initial ascent, we were able to spread out a bit and enjoy some running along a ridge line.

I ran along trading places back and forth with Abbey (new trail friend!) and a few others. My focus was to keep my heart rate down in the fat burn zone as much as possible. The simple goal was finishing the race with a goal time of 16 hours maximum.

The checkpoints were great, and offered good sustainance. Electrolyte / juice / coke refills as well as savoury and sweet snacks. Everyone was super helpful and did our refills for us.

At CP2 (near the River Usk) we were spoiled with hot chips. At CP3 (Parkwood) we had the option of a hot drink too!

Running into CP3 with new trail and ultra friend Tom, we heard the sound of cow bells. The two energetic Limitless trails staffers there were absolutely great (and provided some good laughs too).

I changed out of my base layer and put on a fresh shirt from my drop bag. We had coke, snacks and a quick hot drink and I re-applied sunscreen to ward off the sun’s now beating rays.

Tom and I set off down and around Pontsticill Resevoir with Abbey following shortly behind.

This was the initial approach toward the Brecon Beacon peaks. Our coming route would take us around and up, nearly reaching the top of Pen y Fan, then heading all the way down again to CP4 (Storey Arms) before having to ascend all that elevation over again, this time to the top of Pen y Fan.

The second, and more brutal elevation hardships had soon arrived. The profile would now take us up the mountain range, down, up, and down again.

I find the next series of photos from this section of the ultra quite amusing, as you can see the pain in my facial expressions slowly developing.

The early evening leading to finish

Tom and I stuck together for much of the last bit of the race. After finishing all the hard elevation of the Beacons mountain range, the sun was beginning to set. On the ridge line we started to get cold and put on a warmer layer.

Shattered after the prior ups and downs, I re-fueled with a snickers bar and some haribo sweets. Tom headed off ahead of me to see if he could keep pushing for his goal.

I didn’t think I would be able to keep up but the warmth of my Salomon running jacket combined with the ingested chocolate bar gave me a second wind. I sped off along the ridge line of the mountains, enjoying a bit of solo running and the beautiful views.

Miraculously I was able to keep only a few hundred meters behind Tom all the way to the bottom. We met up again after 45 minutes and decided to finish the race together.

The final checkpoint was unmanned. Dusk had arrived, and we re-fueled with 2 x cups of coke at the little table that had been setup for support. Earlier on we had passed three or four people and we wondered how much distance we had on them as during our ridge descent we didn’t spot anyone else behind us.

The final leg of the Blacks to the Beacons 50

We set off again to join up with the canal route in, the final leg of the race.

As we were passing through and closing a cattle gate, all of a sudden Abbey pounced out of the dim, late evening light, full of energy. We were pretty startled as she proclaimed 3 x cups of coke at CP5 had bounced her right back.

The three of us ran in the remainder of the distance to the finish. The canals were flat and boring. We were also all pretty shattered after running all day. This part of the race was tough, but the 3 x of us soldiered on.

The final few kilometers required headtorches as we lost the last remaining light. After what seemed an eternity along the canals we suddenly saw the village hall in the distance. With some celebration and whooping we powered on through the finish line.

With hugs, high fives and medals all around, we entered the hall to relax and get some hot food in our bellies.

Tom roughly met his goal time, I surpassed my goal time by 1 hour 30 minutes (we finished in 14 hours 30 minutes), and Abbey improved her previous year’s time by 3 whole hours!

The 2022 Blacks to the Beacons 50 mile ultra marathon was brilliant. A truly great experience, lots of comraderie, beautiful views, tough terrain and many memories.