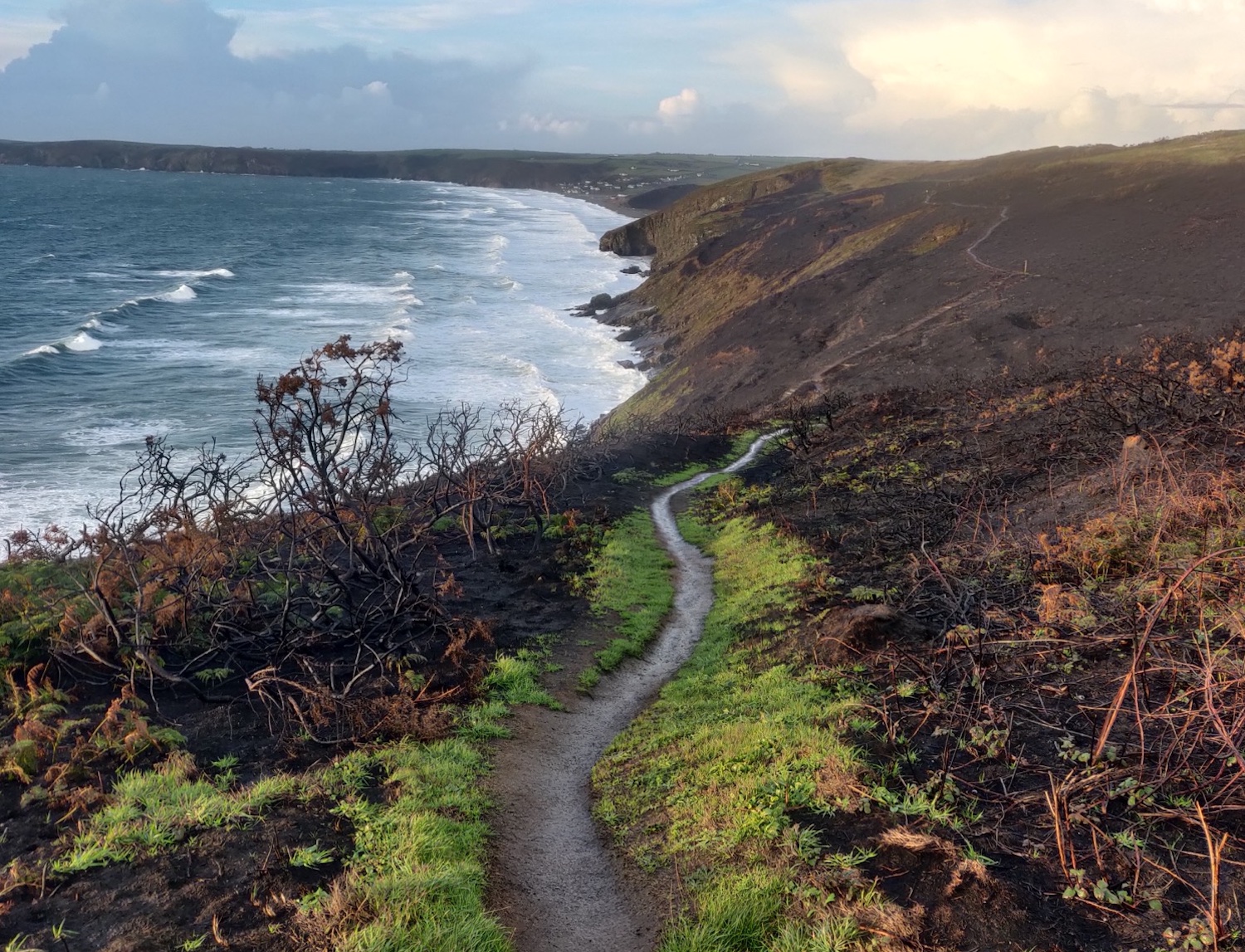 Hot off the heels of the North Coast 110km ultra I did in North Devon a few weeks ago, I was keen for some more running on the coast. Living right near the Pembrokeshire Coastal Path meant I could get right back into it.

My Route to the West Coast

The journey from my door to the coastal path is about 11km along farm roads and some sections of trail. It’s quite a boring 11km, aside from the trail that passes some ancient barrows and cairns, as well as Roch Castle (a 12th-century castle, now serving as a hotel).

The tedious run to get to the coast is totally worth it though. After 11km, I arrive at the West Coast, and have my choice of going North or South.

To the North I immediately come onto Newgale beach, a 2 mile sandy stretch which leads on and up the coastal path toward the small towns of Solva and St David’s. Running from Newgale to just a bit further past St David’s and then back again is roughly 35km, or 22 miles.

There is a lot of up and down along the coast as the trail follows a rapidly undulating path with some spectacular views. I posted about the Newgale to St David’s coastal path route once before.

Going South instead takes you down toward Nolton Haven and Broad Haven. This is also a beautiful section of coast line.

I really am spoiled for choice.

Interesting Locations on the Way to the Coast

Here is a photo of Plumstone mountain, a notable stop on my route to the coast. It has some interesting history and is home to ancient barrows and cairns. Best viewed during golden hours in my opinion!

Shortly after this, I enter a lower section of moorland. It can get really wet, muddy, and boggy here.

I actually had a spurt of inspiration after the Devon North Coast 110 ultra, and ended up running a number of coastal path runs back home in Pembrokeshire over a couple of weekends.

Earlier in November I ran this coastal path. It was a nice change compared to my classic Newgale North/South route.

This particular weekend was back-to-back long run training for me. So it called for two long-ish runs, Saturday and Sunday.

One of these was a half marathon along the coast, starting at the cannon fort by Fishguard harbour, and going out toward Newport, then back again.

This section of coastal path was breathtaking. I’ll let the photos do the talking…

Earlier that morning we had torrential rain and some really strong winds. I had planned to go out for my long run early when I woke up, but that weather was strong enough to persuade me not to.

I’m really happy I didn’t, and instead went out in the late afternoon. As you see above I was lucky with the weather and golden hour.

The trail was however another story. It was extremely muddy, wet, and slippery. Even my Inov-8 TrailFly shoes struggled with traction here.

Number 2 – To the Coast, then Northward from Newgale

This one was in late October. Starting out in torrential rain at home (the farm road we live on was a river of water and mud!) I ran westward to the coast. Passing the above-mentioned Plumstone mountain I was battered by wind and rain.

On the way to the coast, I went through a few more squalls, each getting seemingly worse.

However, I soon arrived at Newgale with some spectacular light in the distance. I ran the 2 mile stretch of beach, and then started the up and down coastal path toward the small town of Solva.

Thankfully the weather let up a bit for the best part of the run. Here are some of the views.

After some time along the now muddy coastal path, I reached my half-way turn around point at about the 18km mark. This was where I saw the best views as the clouds parted over the sea, and the sun began to set.

I love this south section which leads from Newgale beach toward a small town called Broad Haven.

Yet again, I was soaked on the way by squalls of torrential rain. All worth it though, as if by magic, arriving at the coast the weather cleared (not the wind though!)

A little further on I reached Rickets Head, a large rock protuding into view, and standing out quite prominently against the rest of the coast line.

The section of coastal path leading down to Rickets Head is quite steep and technical, but can be fun to run down. Here is my first attempt from a different ocassion, running a little more cautiously as I ‘learned’ the way down and tried to keep my balance in the strong wind.

I’m really happy to live near the Pembrokeshire Coastal path. Running it never gets boring. The weather is ever changing along the coast, and the tides change the look. If you time it right for morning or early evening you’ll often be treated to even better views in the golden hour light.