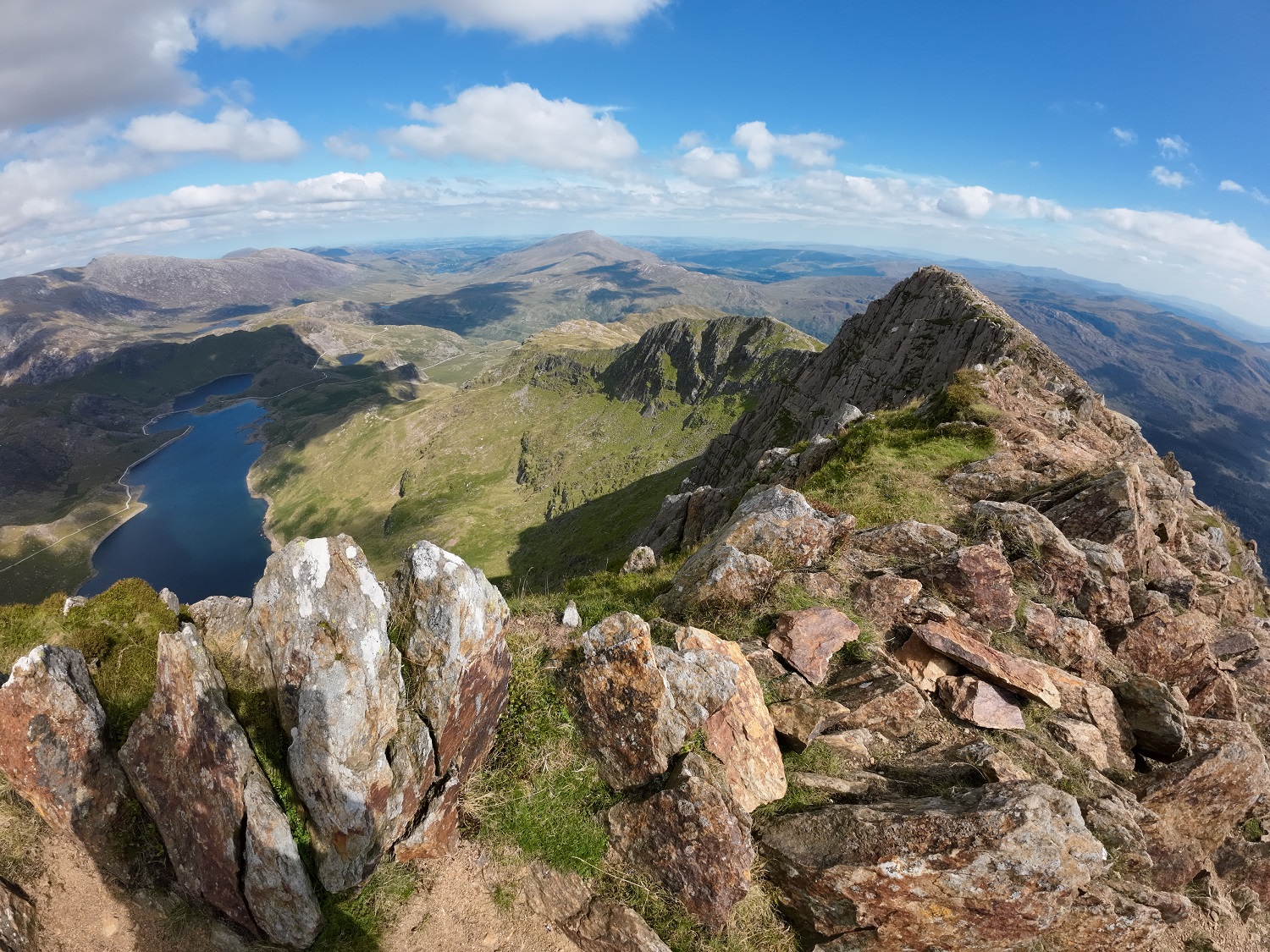 Earlier this week my family and I headed up the coast to North Wales. The destination – Snowdonia National Park, where the plan was to explore the area, learn some of the history, and for me personally: mountain running in Snowdonia.

We settled in to a small apartment that we rented, just across the road from a cafe in Brynrefail. We were just 5 minutes away from Llanberis, and right next to the Llyn Padarn lake, which had some amazing views looking south east toward the main peaks, including Snowdon itself (Welsh: Yr Wyddfa). Snowdon is the highest mountain in Wales, with an elevation of 1085 metres (3560 ft) above sea level.

The next morning I was up and ready for some exploring with Ieuan, an experienced mountain and running guide local to the area. We set off from a car park in Llanberis and made our way up toward the mountains.

The plan was to cover roughly 30km of distance, with 2000 meters (6500ft) of elevation. Much of it being part of the official UTMB UTS 50 route. I am signed up for Ultra Trail Snowdonia 50, so this was going to be a great recce run of the area.

As mountain weather can change drastically in a very short space of time, it was imported to gear up accordingly. Being prepared for all eventualities is important, and it is often advised to be prepared in the case where you are immobile in very cold weather for 4 hours – the time that it could take mountain rescue to get to you.

The weather was forecast to be mostly clear and partly cloudy. We also checked specific mountain weather forecasts before leaving in the morning.

I was carrying my Salomon Adv Skin 12 running pack with the following extra kit and nutrition:

Making our way up Telegraph Valley

The initial running was fairly relaxed and easy, though still quite hilly in parts.

The route led us in-between some smaller peaks, Foel Goch, and Moel Cynghorion, and onto the Snowdon Ranger Path (Llwybr Cwellyn).

Going up to Snowdon

Next we began the ascent to the summit of Snowdon. The trails got more technical with lots of rocks as well as elevation change. The path going up the mountain offered a spectacular view of the Llyn Ffynnon y Gwas lake off to the side.

This is where the running went down to “power hiking” instead. The climb was long and steep.

Here you can see the peak of Snowdon in the distance. There are alternative ways up the mountain including a diesel powered train that was running 3/4 of the way up. Queues were starting to form for the trig point at the very top.

Unfortunately I didn’t take any photos from the very top – we bypassed the last few meters of the trig point to avoid the queue. From there we started a very steep and technical scramble down from the summit on the Watkin Path.

Scramble up and across the ridge of Y Lliwedd

From here, the next peak to take on was Y Lliwedd. This mountain is directly connected to Snowdon and offers grade “A” scrambling up to the top.

This section was a lot of fun, as there are many different ways to scramble up. It was a mixed bag of climbing and scrambling fun. We picked different rocks and ledges to climb all the way up to the top.

Here is a short clip just before the fun scrambling started.

And finally a nice view from the top…

After traversing the windy peak of Y Lliwedd we continued on down the track, passing the Llyn Llydaw lake. This route would take us all the way down to Pen-y-Pass, a mountain pass and popular car park for the region. Many park here to take various routes up to Snowdon.

On the way down we stopped for a short break and I took a panoramic view of the lake and the route we just descended (looking back and up toward Y Lliwedd where we had just come from).

After reaching lake level, it was fairly easy gravel track running all the way to Pen-y-Pass.

Upon reaching Pen-y-Pass, we refilled our water, and then set off toward the Pyg Track. This track would have us summit Snowdon a second time (this time from a different approach).

Pyg Track back up to Snowdon

The Pyg Track is fairly technical in places and takes you up a steadily increasing amount of elevation, all the way till you reach just shy of the summit of Snowdon once again, marked by a finger stone.

Ieuan was kind enough to film me running some of the Pyg Track on our way up again.

Snowdon Summit back to the start

Ending off the day, we took the Llanberis Path all the way down from the summit of Snowdon back to the car park in Llanberis.

With the day’s light starting to fade, the views over the surrounding areas and peaks were spectacular.

One thing is for sure – I can’t wait to get back again for more mountain running in Snowdonia.

This post is only really focused on the trail and moutain running I did. Whilst we were in the area, the family and I also spent time exploring other trails and activities.

There is so much to do in Snowdonia National Park. We didn’t even scratch the surface in our 4 days there.

Here are a more snaps. Among other things, we took a miniature steam train ride around a lake, explored the area around an old slate quarry / mine, and visited a waterfall.

The day following the guided UTMB UTS 50 route, I went out early in the morning to run up to the summit of Moel Eilio with a friend. Hopefully I’ll get a chance to post that up separately.

5 thoughts on “Mountain Running in Snowdonia”