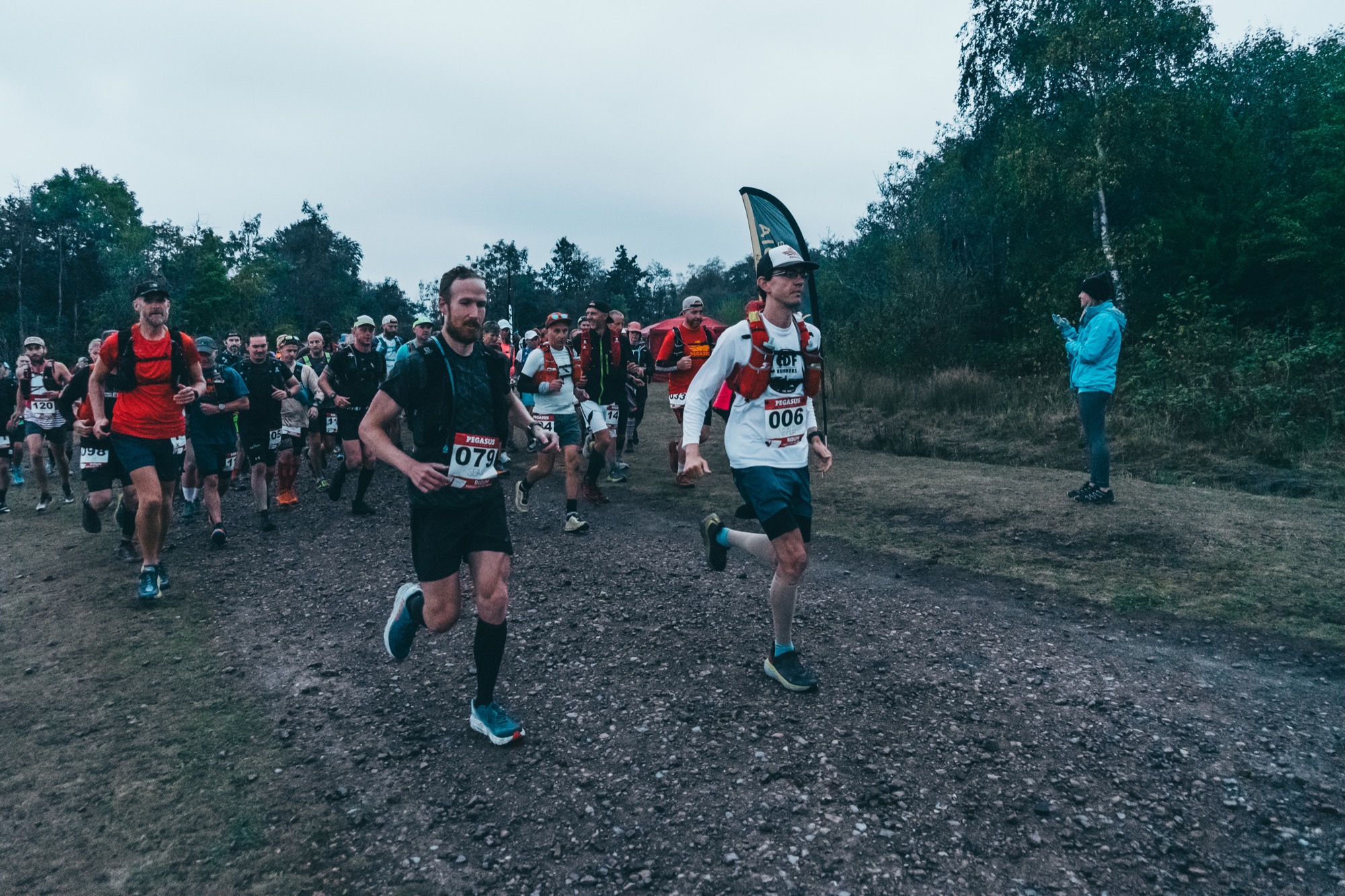 The RIDUM 2022 was yet another brilliant ultra marathon by Pegasus Ultra Running. The course itself is roughly 30 miles (50km) and traverses the Rhymney Valley Ridgeway near Caerphilly, Wales.

Being 50 km in length, I knew I wanted to run this one faster than a typical 50 miler, but I was cautious not to be fooled by the distance as it includes quite a hefty amount of elevation gain over the distance (4250 feet, or roughly 1300 meters).

I picked out a target average pace goal of between 6:00 min and 6:30 min per km, which meant that I should finish the race somewhere between 5 and 5 and a half hours.

Training leading up to RIDUM 2022

Training has been an on-going effort with quite a number of ultras / races mixed in. I have run 4 x pegasus ultra running events now over the last 4 months, and the month before that was the limitless trails Blacks to Beacons 50 mile ultra.

I have therefore been incorporating these events and a slight bit of down time after each into my training plan.

The month leading up to the RIDUM 2022 saw me following more of a structured strength training program, along with:

With the EDDUM 2022 in the mix, as well as my escapades in Snowdonia, the month of August before the RIDUM 2022 saw me complete 8500 meters of elevation gain in my running. Definitely my highest monthly elevation volume in as long as I can remember.

I was however aware that I would be running this event on slightly tired legs. I couldn’t resist all the running and mountain climbing adventures a couple of days before in Snowdonia!

I didn’t want to drive 2 hours to Parc Penallta (the start and finish line) on the morning of the race, so I booked a cheap farm campsite nearby in an area called Blackwood. (15 minutes away).

I later discovered that the RIDUM course passed very close by to my campsite!

Friday late afternoon saw me preparing my pack and camping gear. I had the car loaded up and drove east across Wales, arriving at the campsite in the early evening.

I would be leaving the campsite shortly after 5am the next morning, so I didn’t bring a tent, electing to sleep in the back of the car (an estate with lots of room when the seats are packed down).

Dinner would be a simple pasta and pesto mix that I prepared earlier in the day and brought with.

Upon arriving, I discovered I was the only person at the campsite. A peaceful night’s sleep was almost guaranteed at this point!

My gear selection is partially visible in the picture above, packed in the car, but here it is in detail:

Starting with my running pack – the Salomon Adv Skin 12, I added:

As for what I was running in, I used:

Registration was smooth, except for the sporadic rain. Lots of friendly faces as always. I got my race bib, signed my waiver and had a bit of a chat with Steff (who completed his Pegasus Slam with this race – 6 ultras in 6 months!)

I used the opportunity to quiz Steff about the course as he had run it the year before. He confirmed that road shoes should be “OK” for the type of terrain, but that there would be some loose and chunky rock, as well as mud in places to contend with.

Start to the first checkpoint

Shortly after the race briefing, just after 7am we set off. I manouvered to the front of the pack to ensure I didn’t get caught in any back logs – something that could easily happen with there being somewhere around 150 runners.

The initial 3-4 km’s were easy running on solid path. I found myself running with the leading 5 and keeping a fairly easy tempo pace.

The best part of this segment was running with a guy who had brought along his sheep dog. The dog was simply amazing. Very well trained, he would run ahead and then wait. If we got nearby any animals – sheep or cows, he would lie down in typical sheepdog fashion. They both completed the full 30 miles later on!

The morning was foggy and visibility was quite low. Not expecting the checkpoint so soon was slightly disorientating (see in the video below!) I hadn’t even considered if I would stop for liquid fuel or not. I elected to continue right on through after the initial change of direction confusion.

Just out of CP1 was a massive, loose rock hill to climb, up to the first hill/summit. I believe this was Mynydd Machen – 363m above sea level. I slowed right down here and power hiked up. Sweat was dripping everywhere after the sudden loss of wind in my face, and my eyes stung like crazy.

Thankfully the top arrived soon enough, and after a bit of a plateau run followed by a sharp descent I got wind in my face again.

After running through a steadily inclining woodland, the 25km half way mark approached. I was running in 5th position by my count and found myself catching up with number 4 up the hill. We had a brief chat and I slowly passed him, soon arriving on a tarred road and a huge purple bannered checkpoint / aid station.

With the different colours I honestly thought this was some other race’s checkpoint and I breezed on by, making my way up the hill for a few meters. I heard “wow! he’s not stopping” from the very enthusiastic crowd of volunteers. Quickly doubting myself, I circled back around and realised this was actually the half way checkpoint for the RIDUM!

I very gladly grabbed a cup and a half of coke here, and made my way up the hill, joined once again by the friendly chap I passed just 10 minutes before.

The hills and terrain get tougher

Following on through the course, things were getting a little tougher. The trails became slightly less runnable, and slightly more overgrown.

At some point the route passed through a golf course, and the GPX route led to what looked like solid wall of ferns, bush, and bramble. There was however, a very small path to follow up and out of the golf course.

It was very overgrown though, and full of brambles, wet ferns, and my number one enemy – nettles. I ran up though, receiving a handful of light cuts from the bramble, and got soaked by the massive wet fern leaves.

This was my least favourite part of the course 😂

Having passed position 4 earlier, I was now sitting in 3rd place. I tried to keep my pace up and topped up my body energy banks with some Kendal mint cake as I power hiked up a hill.

By checkpoint 3 I was closely tailing the current second place holder, Neale. I had seen him just about 1 minute ahead of me on the hills leading up to the checkpoint.

I refueled with coke and the last bit of my mint cake and tried to catch him on the grassy, hilly trail out of the checkpoint.

At the top I met up with Neale and we ran together for a little bit, both feeling quite fatigued with the roughly 1000m of accumulated elevation by this point.

We had also both passed through a boggy, muddy section next to a farm earlier. It left our shoes and socks soaked through and full of mud. Spirits were slightly dampened, but nevertheless high, as we only had another 10-12km more to go.

I filled Neale in on the rough time delta of the person behind me, and continued on ahead, slightly faster to take position 2.

The area in this last section was quite remote. I didn’t many other souls, aside from one person and a couple of offroad bikers. The final bit of elevation here had us climbing Mynydd Eglwysilan – where there lay an old, tipped over trig point.

I kept up my pace, best as I could, as I was pretty sure that Neale would be keen to get 2nd place back, despite his legs cramping up a bit.

The final major descent was about 1.5km down a tarred road, and I applied a quick 4:30/k pace down this section to be sure to keep as much buffer open between us.

The final few kilometers were tough. Coming into Parc Penallta, I was faced with the final bit of elevation and climbing before the finish line. I had to power hike it!

Soon the finish line appeared as I passed the car park.

A sublime moment once again to cross the finish line as shouts, cheering and bell ringing sounded out. It was great to receive the finishers medal from Rhys, as well as another 2nd place trophy.

About 5 minutes later Neale followed in behind me – it was great to see that he had managed to hold onto 3rd place.

A big shout out to Jack who managed to take 1st place. I came in 10 minutes behind him (after trailing him by about 5 minutes at the last checkpoint). He pushed harder at the end than I could!

I went and fetched a couple of ice cold drinks from my car, changed out of my muddy gear, and spent a couple of hours at the finish line chatting, watching and applauding finishers coming in.

Here is my completed RIDUM 2022 Strava activity link for the curious. If you’re on Strava drop me a follow – I love to follow back and get inspiration from other people’s activities.

Did you run the RIDUM 2022? Let me know how you found it below in the comments! Have you tried running trails or off-road terrain in road shoes? How did you find them?

Massive thanks go to the brilliant Pegasus ultra running team, and all the supporting crew for putting on the RIDUM 2022. The volunteers are incredible people for giving up their time to help out with these events. I look forward to the races coming up next year, and hope to volunteer my time to help out on some of them.

More thanks as always go to Antelope Media – they’re always about to capture great photos of these events.