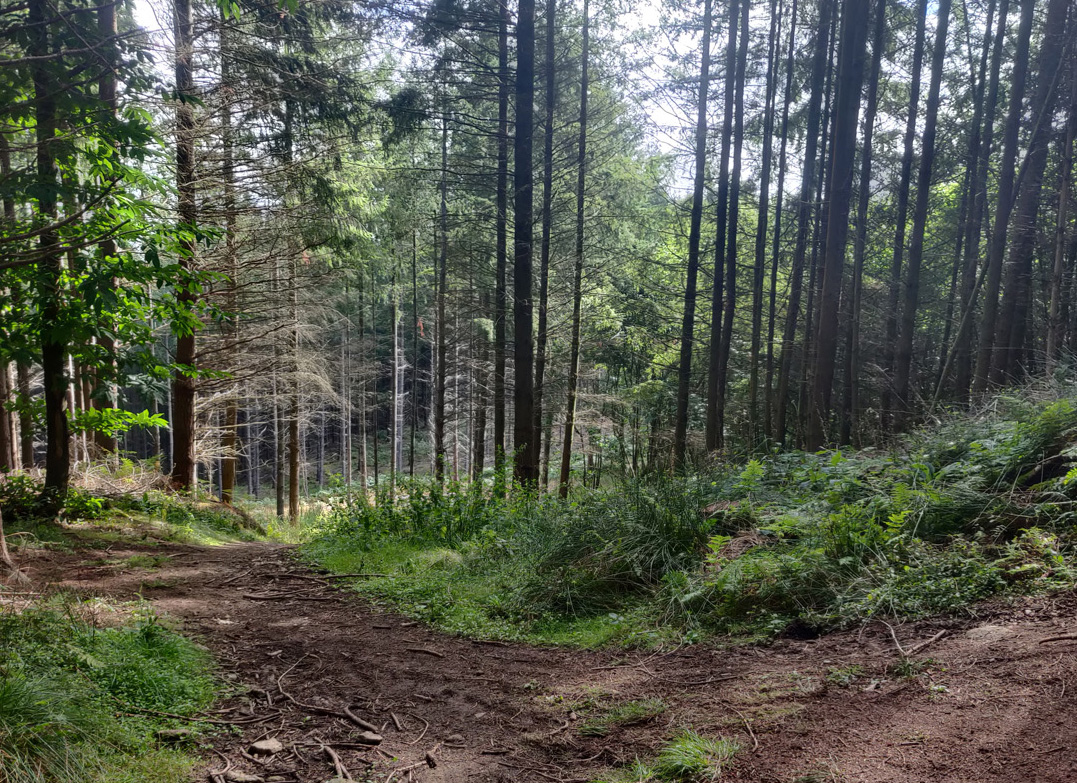 The route I took had me start in Liphook, running a couple of km’s on the road until I could enter the trail nearby the local train station. I would follow the trail for roughly 30km and then double back to complete another 30km or so, totaling 61km.

This is the route I took from Liphook down toward Petworth and then back again.

I managed to complete the route in just under 7 hours. The biggest challenge I found was the elevation and sections with fairly difficult terrain. Rocks, mud, etc…

With most of my hydration food and hydration packed the night before, I set off at 6am for a nice early start.

The terrain was fairly easy for the first 12km. Here are some photos from the initial 12km, between Liphook, Rake, and Hill Brow.

After an hour and a half of running, finally a bit of sun peeked through the trees. The morning had otherwise been humid and overcast.

At around 20km in, I met with a crazy section of elevation. It was at a 25% grade at one point! This section really slowed me down, but the view from the top was spectacular (apart from the grey clouds).

The elevation at this hill climb brought me down to a snails pace.

Around the middle of the run I came across these newly placed snake monuments / statues, marking the trail.

The next bit of trail ended up being quite overgrown and rocky a bit further down. I nearly rolled my ankle here.

At around the 25 to 30 km mark the Serpent Trail passes through this large open farm field and you run under a series of massive electrical pylons.

I ran a few extra km’s past this point and then turned around to do the route in reverse again (for the most part).

The highlights of this South Downs ultra trail running route for me were definitely the numerous forest and woodland sections. You can run for miles and miles and not see a single person in some parts.

I had a bit of a mishap around the half way point. I was running the trail, but came out of one area, missing a sign post for the continuation of the trail.

Soon I was on a busy section of road between towns that led up a long and winding hill. The trail was up above me, but there was a hill on that side of the road, quite high up (at least 7 meters). It was also at a very steep angle. I decided to scramble up the hill, using holds on small trees as I climbed. Unfortunately I pulled myself through a concentrated patch of brambles on the way up.

In hindsight, it would have totally been worth backtracking to find the correct way up to the trail. This detour ended up in a bloody leg and scraped up arms half way through the run.

Luckily the scrapes were quite shallow and the bleeding stopped quickly.

On the last 10km stretch home, I got caught up in two torrential downpours. My phone quickly got relocated into a waterproof compartment so I didn’t get any photos from that point on.

The rain was welcome for it’s cooling effect, but it was bittersweet as it washed much of the sweaty salt accumulation from my hair into my eyes.

Despite the minor setback with the brambles, overall it was an excellent ultra marathon trail run. The weather held out for the most part, was fairly cool, and the elevation added a good amount of challenge.

I took about 3 days of rest afterward for recovery.

If you’re ever in the UK and around the South Downs region, I would highly recommend taking a shot at the Serpent Trail.